Free UK Shipping on orders over £30

Become a Premium Customer and enjoy 15% off all of your orders! 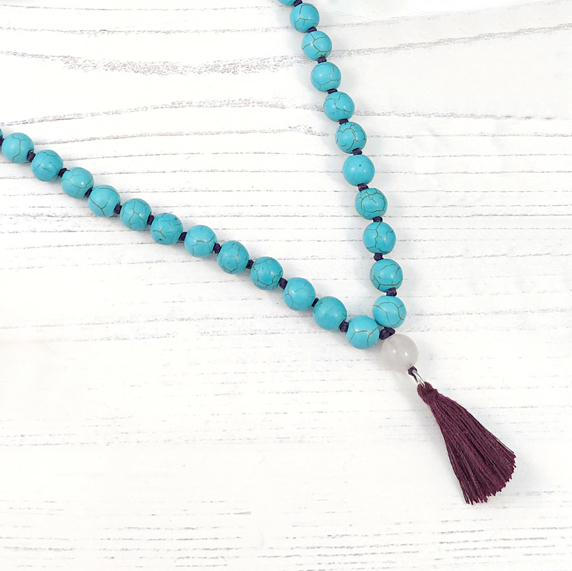 Buddhist prayer beads or malas are a traditional tool used to count the number of times a mantra is recited. They are similar to Catholic rosary beads used in prayer though they tend to have 59 beads and finish in a cross or crucifix. Misbahah are muslim prayer beads, usually in strings of 99 beads.

Mala necklaces consist of 108 beads plus a 109th Guru bead and are used to count the number of times a mantra or breaths are repeated.

The beads are usually knotted in between to provide separation, making it easier to pass each individual bead between your thumb and index finger. The knots also have the added benefit of reducing the chance of losing a bead if the necklace breaks. Wearing the mala as a necklace or as a bracelet throughout the day is supposed to help you manifest the power of the gemstones its made from. It also serves as a reminder for your daily meditation practice. It is customary to give gratitude to teachers and the most important people in your life when you reach the guru bead. The necklaces often have a tassel or pendant attached after the guru bead which helps to mark the end of your mantra sequence.

Meditation positively affects the brain and mood and helps you to relax. If practised in the morning it can provide you with a way of setting a positive intention for the day, leading to a happier, more positive or productive day.

108 x 8mm beads (Semi-precious beads are great for this – why not check out our blog post about healing crystals to select the best beads for you.)
1 x 8mm Guru bead
Tassel
S-lon thread
Flexible beading needle

Depending on the hole size of your beads, you may need to double your S-lon. You can test this by taking a small piece of S-lon making a single overhand knot and threading on one bead. If the bead slides over the knot, the knot needs to be bigger. The easiest (and neatest) way of doing this is by doubling up the S-lon and making an overhand knot with both cords held together.

We filmed a short video to show one way of knotting between beads;

If you’re still feeling a little unsure about making your own Mala beads. We also run Mala Bead workshops, or individual 1-2-1 sessions to help you make your own.

Hear all about our exciting new products, workshops, kits, giveaways and special offers first hand! Sign up to our newsletter here.