Worldwide, Same day dispatch from £1.25 and free UK shipping on orders over £30* 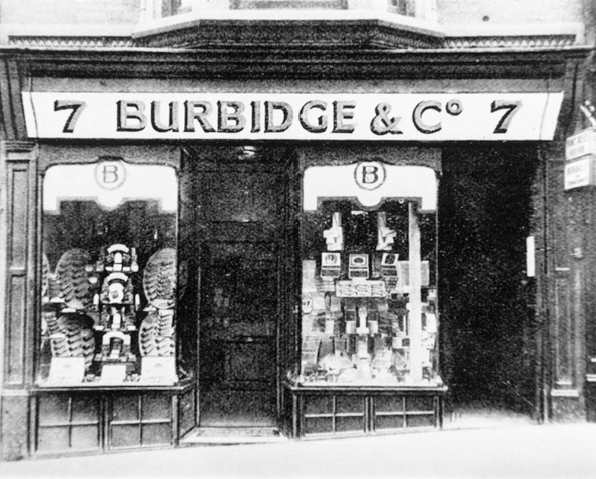 7 Market Street Nottingham is a beautiful Victorian shop and has been The Bead Shop’s home for the last 14 years. I fell in love with it when we first looked around it in 2005 and have been fascinated by its history ever since. I knew it had always been in the care of various independent shops but had never quite been able to piece together all of its history.

Recently I was lucky enough to be sent the original deeds to the shop and from those I’ve been able to work out most of its history. This also led me to finding a picture of our shop from about 1930.

Market Street is a fairly new road in Nottingham’s history, and was almost named Theatre Street. It was built in 1865 to replace the treacherously narrow Sheep Lane which was known locally as Blood Lane, due to the number of people that incurred a bloody death caught between carts and buildings.

In October 1866 Mr Thomas Hart bought the land now known as 7 Market Street from Mayor Alderman Burgesses for £452 pounds! In November of that year he took out a £600 mortgage to build the shop. The deeds are stunning and photos don’t really do them justice; the calligraphy, paper, wax seals and ribbon are beautiful. It’s hard to believe that it was standard legal document practice back then.

The first mention of the use of 7 Market Street is in Thomas Hart’s will dated 23rd February 1875 where he is listed as a Painter and Paperhanger. He left his dwelling house and shop to his two sons. I can only guess the house referred to is the dwelling above the shop and that between 1867 & 1875 the building was in use as a decorators shop of some sort.

I’m not sure of this photo’s date but the shop before the striped awning is The Bead Shop! I really wish streetlights still looked like this!

In 1925 a lease was undertaken between Thomas Hart’s heirs and Josiah Brown Ltd a tobacconists. 7 Market Street remained a tobacconists until 2005 when it became The Bead Shop. The picture of Burbidge & Co (also a tobacco shop) is thought to date about 1930 which is a bit confusing as at this time it was Josiah Brown, so I’m wondering if it actually dates much earlier?

When I first viewed the property I quickly fell in love with the original sash windows, fireplaces and the original skirting boards and coving in our first floor workshop room. When we started renovations on the shop we found the original coving in the shop hiding under an ugly suspended ceiling and a hand painted mural on the wall.

More recently I’ve converted the top two floors into holiday let apartments which wasn’t without its challenges; I guess this was to be expected with working on a grade II listed building. I did find this quite satisfying as it was returning those floors to their initial use as accommodation for the shopkeeper and his family (and possibly any staff he had). During the conversion we found the old bell pulley system under the floor that would have been used to summon extra help to the shop during busy periods.

I’m fascinated by the history of Victorian shopkeepers and my building in particular and would love to find out more. If anyone has any further insight or photos of Market Street pre 2005 please get in touch!

Hear all about our exciting new products, workshops, kits, giveaways and special offers first hand! Sign up to our newsletter here.

Subscribe to our newsletter to receive 10% off your first order. Dismiss